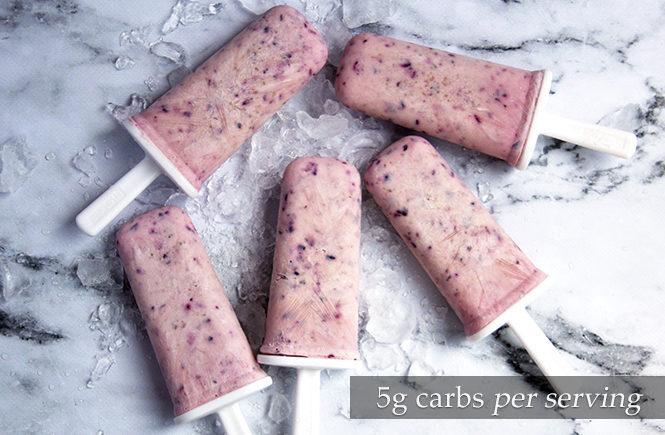 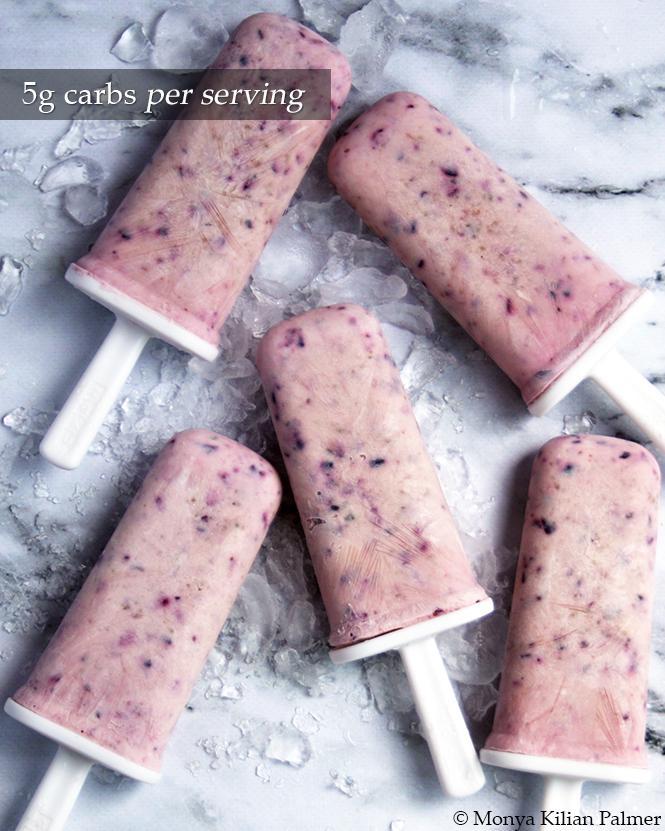 Creamy, delicious with a sweet, tart element, these blueberry cheesecake lollies are a fabulous ending to your BBQs this summer! Funnyman loves them, so I bet this means the kids will too! THIS RECIPE IS ACCOMPANIED WITH A VIDEO. (Scroll down to see it, and be sure to watch the blooper reel Funnyman slips in at the end!) 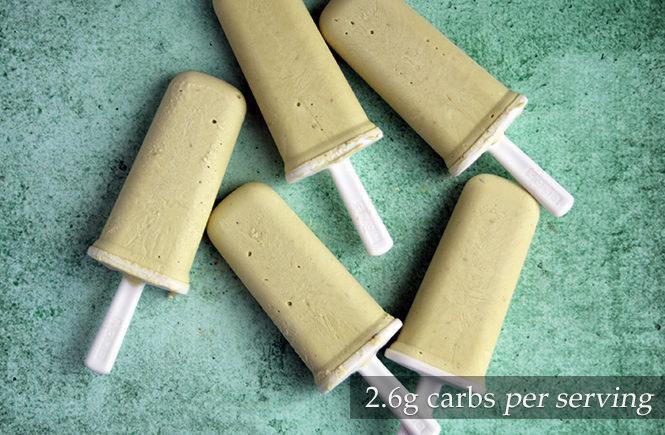 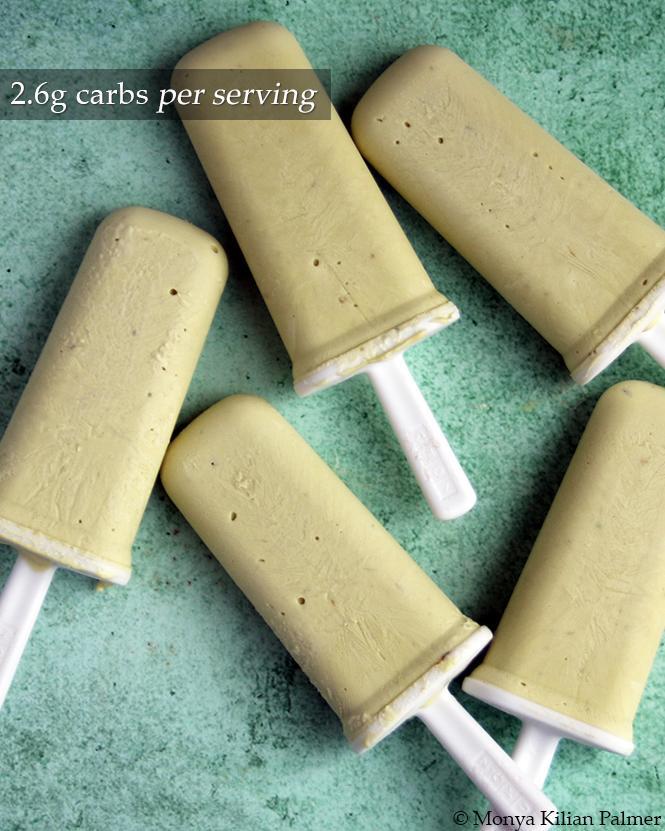 I churn out a lot of keto lollies for Funnyman. A LOT. While I don’t have a sweet tooth (I never have, even life before keto), but Funnyman loves his after dinner treats, so I try and keep things interesting for him by switching things up and changing the flavours of the lollies I make (in addition to the other sweet treats) I make for him! Here, I added cream cheese to the mixture – and it changed the texture in a beautiful way! Without telling him, I added avocado to sneak in some fibre and additional goodness and healthy fats… and this was how my Avocado Cheesecake Lollies were born! Hand on heart, these are now his favourite lollies. And just in case you were wondering – the flavour of avocado does not come through at all: just creamy, indulgent sweetness. 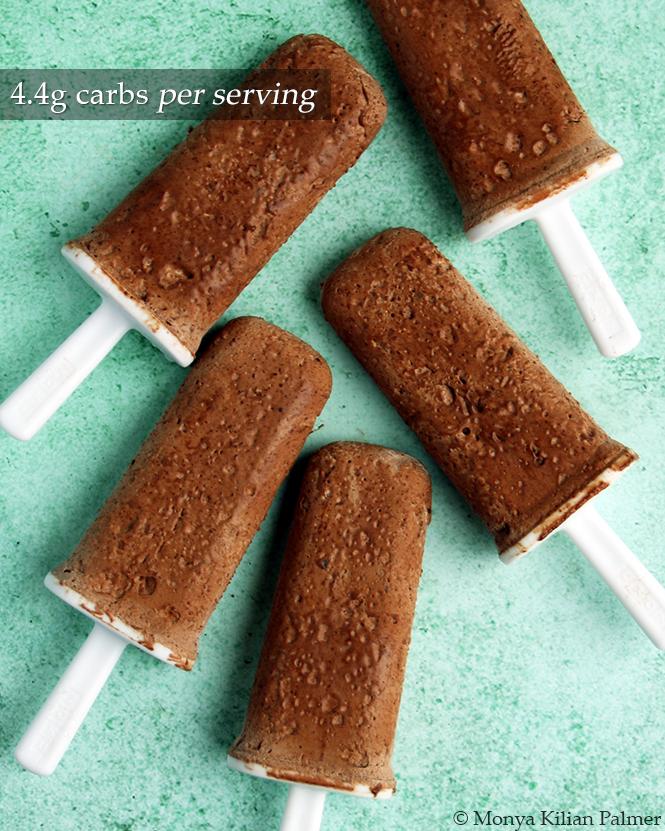 Creamy and chocolatey, these lollies were made with whipped cream, giving a light, airy texture which makes me rethink how I have been making all the other lollies up until now. A simple addition of confectioner’s sweetener and melted 85% Lindt®, and you have a dreamy after-dinner treat. I marked this low carb and not strictly keto, due to the presence of soy in the Lindt®. As we know, soy should be avoided on the keto lifestyle. However, if you are simply living the ‘if it fits your macros’ lifestyle, these lollies will be a great addition to your summer creations. The lolly moulds I use are 100ml / 3.4 fl. oz capacity, but there is so much air whipped into the mixture, you will only use about 70g of mixture to fill each mould. This was how the macros were calculated. I also added a few drops of chocolate essence which really lifts the flavour to another level – you will love it! NOTE: If you choose not to freeze the mixture as lollies, enjoy these as a simple chocolate mousse served up in six ramekins. Unlike other chocolate mousse recipes, these do not require any ‘setting’ time in the fridge – they can be enjoyed immediately. 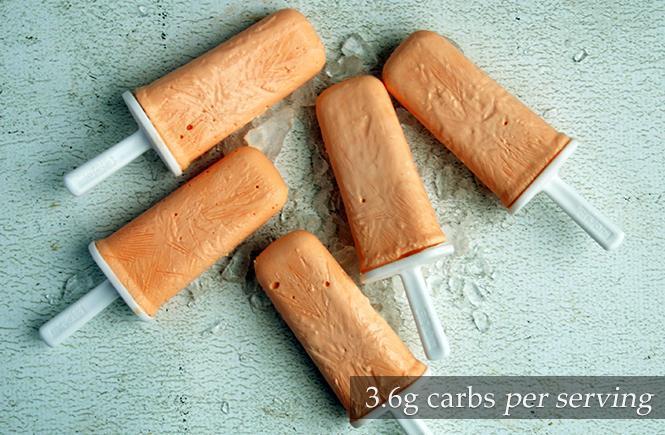 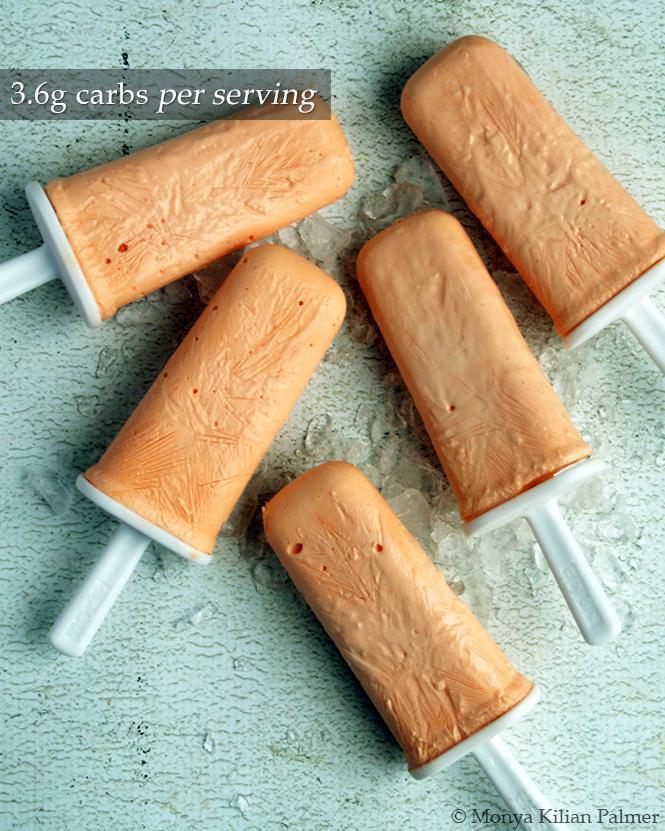 These creamy lollies were made with yogurt and cream and enhanced with the lovely flavour of orange blossom. I added a little orange food colouring, but that is entirely optional. These lollies come in at only 3.6g carbs per serving, and Funnyman is still happily plowing through them and still losing pounds… 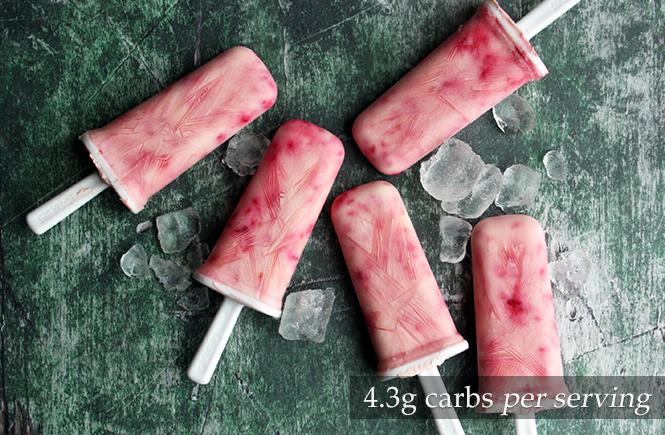 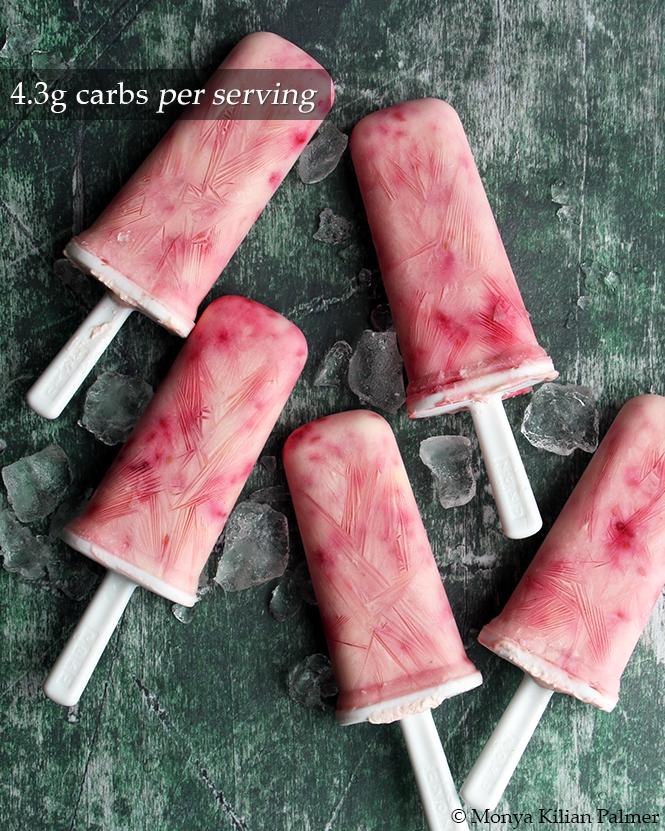 Yes, I am still churning out the lollies for Funnyman, but the look on his face when he sees a batch in the freezer is worth the time spent making them – which happens to be only 5 minutes! Here, I mashed up raspberries and cooked them down a little with some lemon juice bringing a sharp tart flavour. A quick mix with powdered Erythritol (my favourite brand is Swerve®), full-fat yogurt and some double cream and we had another winner! If you like the idea of frozen yogurt & cream lollies, check out the Desserts page, as there are several other great flavours. 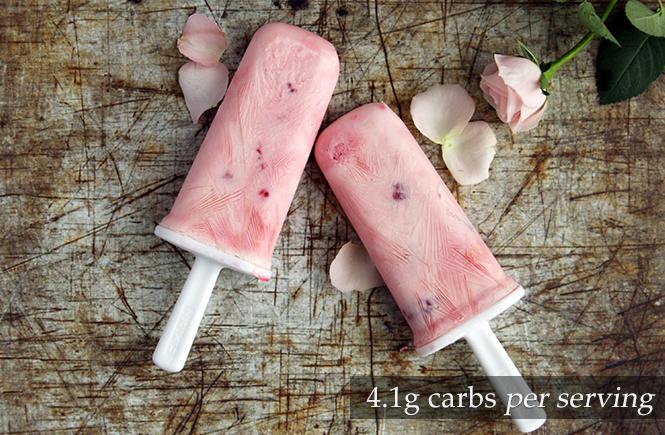 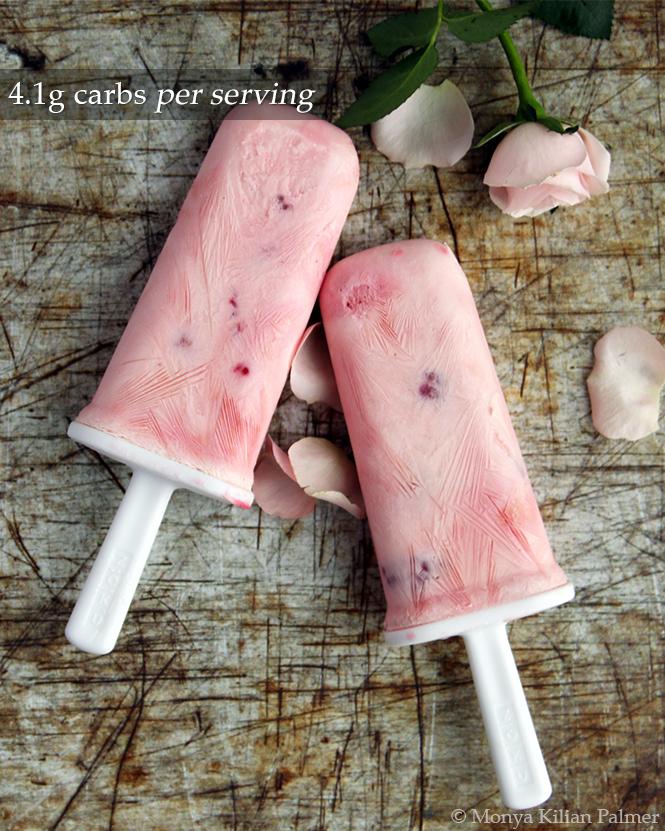 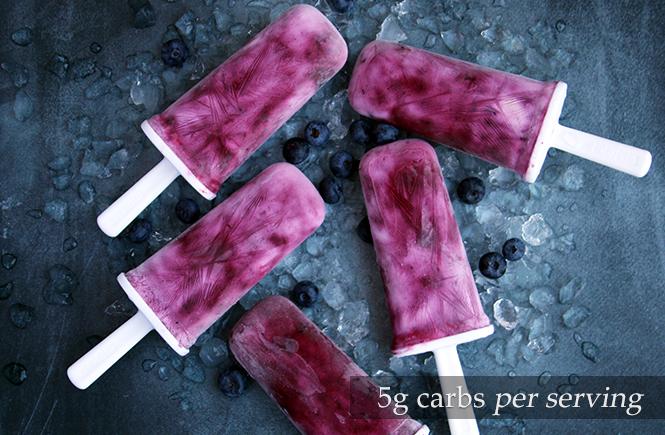 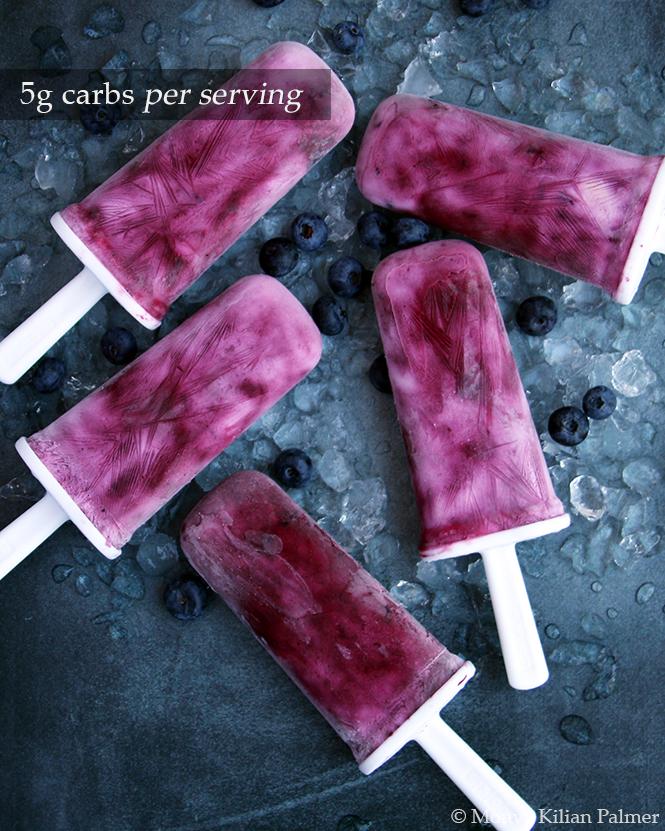 Funnyman wasn’t entirely convinced when I broached the subject of doing keto with me. He has a massive sweet tooth and the thought of giving up his after-dinner treats didn’t sit well with him. A client of mine in the US suggested I try Swerve® (a brand that makes confectioner’s / powdered Erythritol) as a sugar replacement in my cooking and baking and I have never looked back. After Funnyman watched the documentary MAGIC PILL in May 2018, he was amped to start. These lollies were actually the first thing I made him. Of course, I then had to become a lolly-making machine because he happily enjoys one of these most nights.