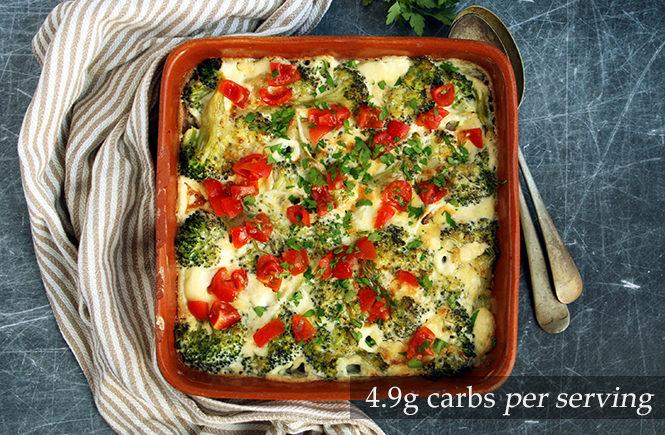 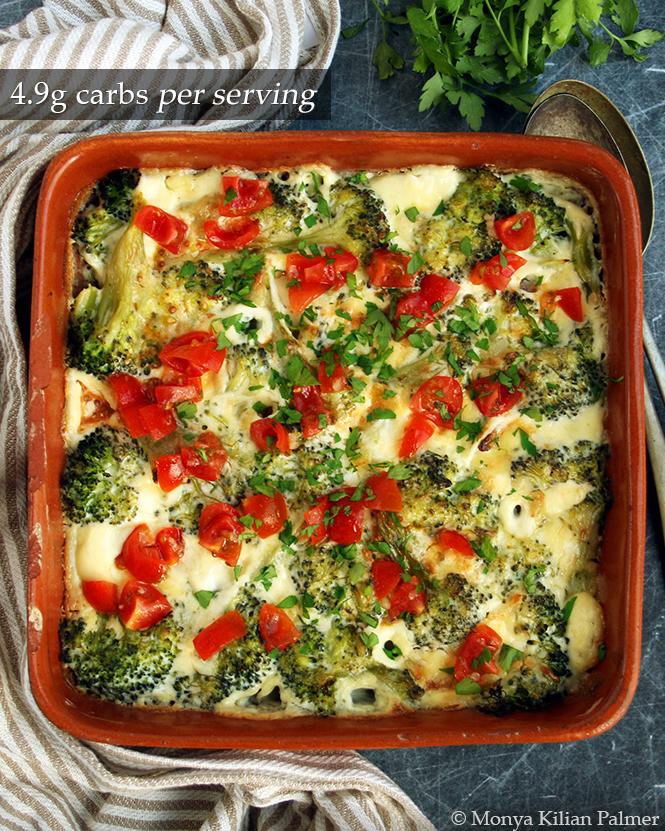 I love cream-baked broccoli: its a simple dish which I throw together quite often. In this version, however, I enhanced the creamy mixture with sour cream and full-fat cream cheese and served the end-result with one of my favourite new homemade condiments: a quick relish made from finely chopped tomato and garlic. This dish is very rich and indulgent and will suitably serve 4 as a side veg option. THIS RECIPE IS ACCOMPANIED WITH A VIDEO. (Scroll down to see it, and be sure to watch the blooper reel Funnyman slips in at the end!) 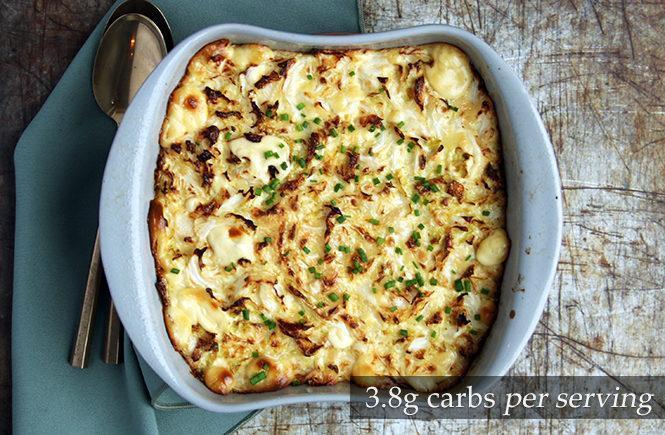 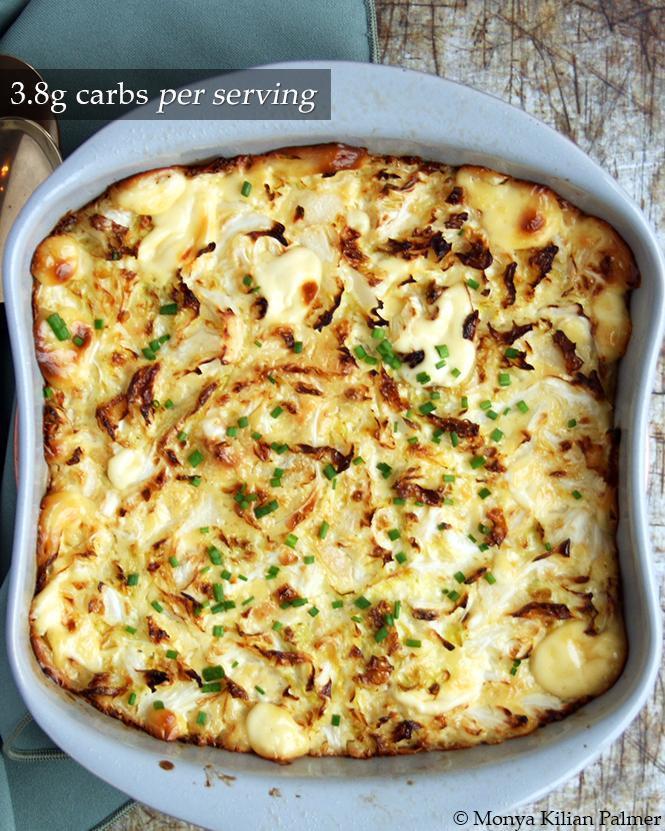 Goodness me, I love this dish! I was home alone when I whipped it up and enjoyed it for several days after. I simply cooked the softer inner leaves of Savoy cabbage (although any white cabbage will do), then baked it in seasoned double cream. To finish, I couldn’t resist a few teeny tiny drops of truffle-infused olive oil to finish. Luxurious and heavenly! This recipe will suitably serve 5 people as a side dish (… or 4, or 6 – some may find it rich, others may tuck in for more because its so indulgent). I therefore stuck to calculating the macros on a 100g (3.5oz) serving, which is pretty generous for such a rich side dish. Given the lovely flavour of the truffle, serve this alongside a simple steak or chicken so there are no competing flavours. THIS RECIPE IS ACCOMPANIED WITH A VIDEO. (Scroll down to see it, and be sure to watch the blooper reel Funnyman slips in at the end!) 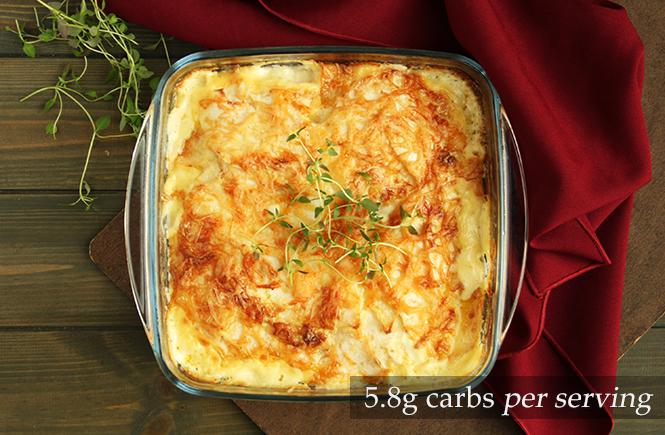 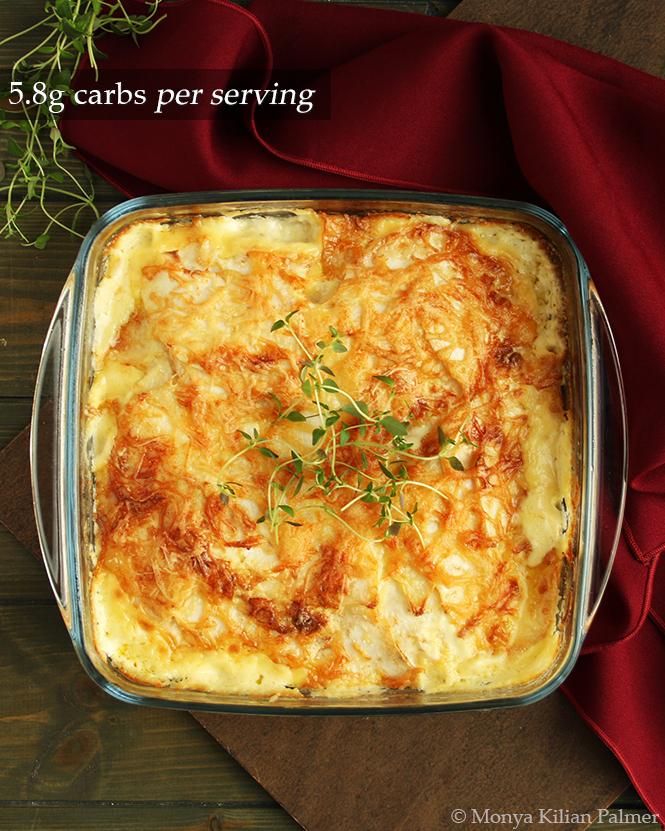 I grew up in South Africa and a mandatory ‘potato bake’ was the highlight of any braai – especially in my family where my aunt would get frequent requests to bring one along to family gatherings. It is a wonderful memory and one that deserved mention here. After moving to the UK in 2012, I used to make my own version, which was more of a classic Dauphinoise. After going keto in early 2018, not being able to tuck into one was the only thing that stung a little – until I discovered how low in carbs celeriac was! So, I adapted the exact recipe I used to do, but used celeriac instead of potatoes – with fantastic results! Try it alongside the Pork Belly and Keto Gravy recipe on this site.

This recipe is rich and filling and would sufficiently feed 5-6 people as a side dish. However, it came in so low in carbs, I decided to calculate the macros that this recipe would serve 4 because I just know you will want more. At only 5.8g carbs per VERY generous serving you will thank me for advising this. If you are cooking for a larger crowd, use the facility on the recipe plugin below and double up the ingredients. Simply prepare the celeriac in batches and use a larger dish. (You may have to also increase the cooking time.) Use a mandolin (with a guard please!) if you can’t get them paper thin like I can with my trusty Robert Welch. THIS RECIPE IS ACCOMPANIED WITH A VIDEO. (Scroll down to see it, and be sure to watch the blooper reel Funnyman slips in at the end!)